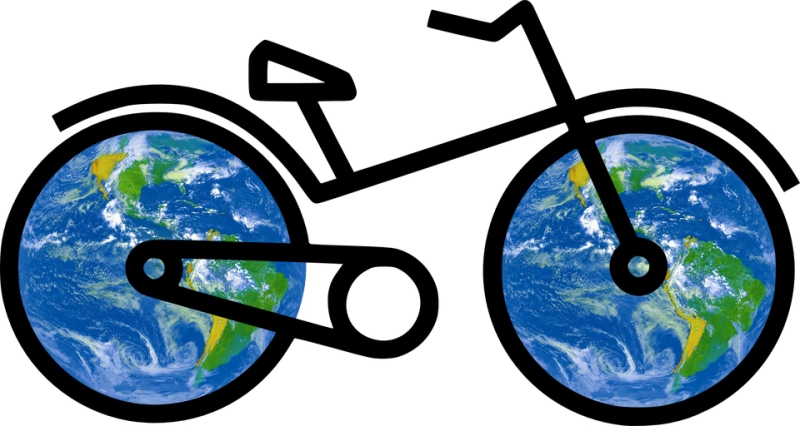 I suspect a recurring theme on this blog will be: what’s the point? My inaugural post starts by facing this existential question. In a world where free-will seems dubious, or at least impotent in the face of powers beyond one’s control, and where one’s actions appear so insignificant and futile, what of ethics?

I’ve routinely encountered detractors who, while seemingly not in the midst of existential crises, have expressed doubt, if not disdain, of the personal ethical decisions of others (usually mine) on the grounds that they are pointless.

“It’s not like riding a bike is going to make a difference,” I’m told.  Well, it depends.

If the universe, in a broad sense, is deterministic, then what could it mean to have ethical responsibility? If everything is predetermined and our choices illusory, then it doesn’t matter what we do one way or another. We certainly cannot be held ethically responsible for our actions. Or, put another way, we can’t have moral duties. But, the issue is not about fatalism, but rather the relative scope of effects.

When someone chastises that some individual action on its own will not have a discernible effect, they may be correct. And the powerlessness of our actions are, in effect, a product of determinism. The direction of society, large-scale problems, the world as it is and which we are born into, are determined by factors out of our control. This is not a philosophical determinism, nor wholly a physicalist one. It is rather a reflection that agency is contextual and relational, and that in most people’s contexts and relations, their agency is relatively limited.

So whence come moral responsibility? Do we have a moral duty to act in ways that maximize effects? Are actions that have small or negligible consequences imbued with less moral might than actions that have broad effects?

Consequentialist theories of ethics are, of course, a major area of concern for moral philosophers. What makes an act morally right? Intentions? Consequences? Something else? As with most things, when it comes to ethics, I’m a pluralist. Consequences matter, but so do intentions, and so does context. The scope of possible answers is too expansive to cover here, so I’ll just focus on one aspect of this problem: what does it mean to “make a difference?”

A key consideration in answering this question is the casual relationship between individual and collective acts. It does not make descriptive or explanatory sense to think of a group of five people carrying a large object as equivalent to five individuals carrying five smaller objects, but yet, the individual acts are integral to the collective product. Most large-scale human projects cannot be enacted by individuals, even hypothetically. City-infrastructure, buildings, complex technological systems – these are all collective enactments. Similarly, structural societal problems like poverty or pollution are collective enactments. This is to say, they are not reducible to individual acts that have been multiplied; they are qualitatively distinct. But paradoxically, it is an individualistic consequentialist ethics that leads to the broad structural problems we face. Because a problem like climate change, for example, cannot be reduced to individuals’ carbon emissions, people can thus rationalize, “I’m not causing the problem.”

So when it comes to seemingly negligible ethical acts (like riding a bike), it is the collective act which becomes the point of reference for evaluating ethics, since the collective act is that which effects the desired consequence – whether it be lower CO2 emissions, safer streets, less pollution, increased public health, or a happier community – not the individual act per se. Thus, a sort of conditional ethics presents itself. If many individuals rode bikes, then what would be the consequence? This is a more suitable question for evaluating one’s individual actions than say, “What is the effect of one person riding a bike?” It provides a way of recognizing that seemingly negligible acts can indeed “make a difference.” And even if the conditional is not fulfilled – even if you’re the only one riding a bike – the act is nonetheless ethical.